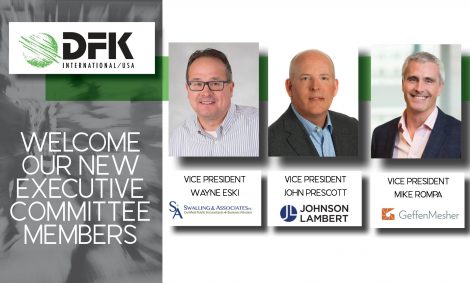 December 2021: DFK/USA is pleased to announce the addition of three new members, Wayne Eski of Swalling & Associates, John Prescott of Johnson Lambert, and Mike Rompa of Geffen Mesher, to join the Executive Committee. Comprised of nine officers, the DFK/USA Executive Committee, is authorized to act on behalf of the Board and meets monthly, primarily by conference call. The DFK/USA Executive Office, located in Denver, CO, is managed by Maureen Dillmore, DFK/USA Executive Director and Rachel Green, Membership Coordinator. The Denver office conducts and facilitates the day-to-day affairs of the association, including all administrative, communication and financial functions, as well as maintaining member relations as well as maintaining member relations and member services.

“We are pleased to welcome to the DFK USA Executive Committee for the first time, Wayne Eski of Swalling & Associates and John Prescott of Johnson Lambert. Returning as a tenured member of the committee is Mike Rompa of Geffen Mesher. Wayne will do an excellent job representing the voice of the smaller firms in DFK. John will bring a fresh perspective as newer member of the association, and Mike will bring his past experience of serving the the Executive Committee, making for a very well-rounded group of new Executive Committee members. We look forward to all their contributions in the coming years”, said DFK International/USA Executive Director, Maureen Dillmore. Prescott says “I’m really excited about joining the DFK board to help us continue to build the DFK brand and association—it’s a great group of people and I’m honored to be a part of it.”

Wayne Eski, Managing Director of Alaska based Swalling & Associates, has 30 years of experience providing integrated tax and accounting services to closely held entities. He is primarily responsible for overseeing comprehensive financial statement and tax engagements. He earned master’s degrees in Accountancy (Taxation) and Real Estate & Urban Economics from the University of Wisconsin-Madison. Since 1991 Swalling & Associates, a full-service public accounting firm, has served closely held Alaskan businesses and their executives, owners, and families. They are proudly recognized as one of the premier accounting firms in Alaska.

For 30 years, John Prescott, Managing Partner of Johnson Lambert, has worked toward implementing strategic direction and oversight of firm operations, vigorously pursuing the vision, mission, and core values of the firm. Johnson & Lambert, established in Washington, DC in 1986, focuses on distinct industries that showcase their knowledge, experience and strong network. Services include Audit and Assurance, Tax, Advisory & Consulting, and Regulatory.

Returning to the Executive committee is Mike Rompa, CEO of Geffen Mesher. Mike’s core responsibilities involve managing the people, personalities and perspectives that exist among the firm’s shareholders, seeking consensus regarding matters related to growth, and the direction the firm takes toward its future. Geffen Mesher, based in Portland, OR, was founded in 1933 and proactively provides financial statement audit, tax compliance and consulting servicers to privately held businesses, families, and investors primarily in the Northwest region.

DFK International/USA is an association of independent, full-service public accounting and consulting firms with offices serving major markets throughout the United States. The association is affiliated with DFK International, with over 300 offices in over 80 countries. DFK provides independent member firms with a forum to exchange practice management information and technical expertise, opportunities for continuing education and leadership development, and the resources to serve their clients on a national and international level.